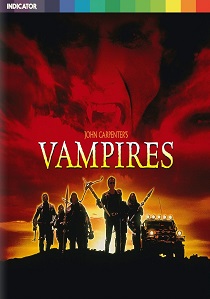 Bitter, tough-as-nails mercenary vampire hunter Jack Crow (James Woods) leads a specialised team that is dedicated to destroying the race of vampires that inhabit the earth. The team is successful, and becomes lazy in its success, eventually falling victim to an elaborate ambush set up by a powerful master vampire (Thomas Ian Griffith). Crow teams up with Montoya (Daniel Baldwin) to fight back. Their only link to Valek is the beautiful, psychic prostitute Katrina (Sheryl Lee), and with her help they set out to confront the ultimate evil.

Carpenter takes the genre to new heights with powerful action scenes, nifty vampire-killing weapons and great special effects. James Woods is Vampires is based on the book by John Steakley, adapted for the screen by Don Jakoby.

HotBDUHD
A winner of awards across the world including Best Foreign Language Film Oscar, 5 BAFTA Awards including Best Actor, Original Screenplay and Score, the Grand Prize of the Jury at the Cannes Film Festival and many more, Cinema Paradiso is released on Blu-ray and 4K UHD 28th September 2020 from Arrow Video. END_OF_DOCUMENT_TOKEN_TO_BE_REPLACED
Hot PicksView