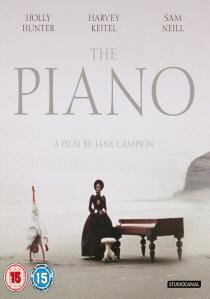 Winner of the 1993 Cannes' Palme d'Or for Best Film and Best Actress for Holly Hunter, Jane Campion's third feature was widely hailed as a cinematic masterpiece. Now the Academy Award winning The Piano is finally released on Blu-ray on 20th January 2014, courtesy of StudioCanal.

Ada - mute since birth - her nine year old daughter and her piano arrive to an arranged marriage in the remote bush of nineteenth century New Zealand.

Of all her belongings her husband refuses to transport the piano and it is left behind on the beach. Unable to bear its certain destruction, Ada strikes a bargain with an illiterate tattooed neighbour. She may earn her piano back if she allows him to do certain things while she plays; one black key for every lesson.

Winner of three Academy Awards® The Piano is an extremely evocative portrayal of repression and desire, universally acclaimed, it is still as powerful and resolute now as it was when first released.