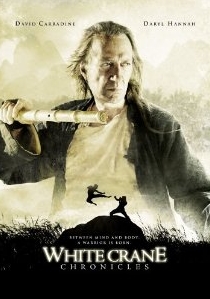 It is the late 1920s and the Chinese Republic is in a state of political unrest with powerful warlords ruling many territories unchallenged. One such warlord is Khan Xin, a despotic leader whose control of one province extends to forcing the populace to work for him illegally producing and distributing opium. Those who resist Khan's rule face certain death. Daring to defy Khan is a temple of peaceful Wudang monks, led by an elderly female Grandmaster of the martial arts, Myling (Pei Pei Cheng), and her protégé, a Westerner known only as White Crane (Carradine).

When Myling is murdered during an unprovoked and devastating assault on the temple by an army of Khan's mercenaries, Crane vows revenge and travels to Shanghai with the intention of infiltrating the city's criminal underworld in order to get close to Khan. In Shanghai, Crane meets Jane Marshall (Hannah), a lounge singer from Brooklyn who is searching for her missing brother. A resident performer at the Double Paradise Club, Jane introduces Crane to the club's owner, Bingo Quo (Jimmy Taenaka), a man with his own personal score to settle with Khan.

With the help of his fighting skills and through Bingo's professional connections, Crane is able to gain Khan's trust and becomes a member of the warlord's inner circle. But with his target now in reach, will Crane be able to overcome his spiritual beliefs and strike the vengeful blow against the man responsible for his friend and mentor's death.