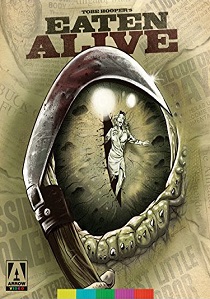 Deep in the Louisiana bayou sits the ramshackle Starlight Hotel, destination of choice for those who like to check in but not check out! Bumbling Judd, the patron of this particular establishment, may seem like a good-natured ol Southern gent but he has a mean temper on him, and a mighty large scythe to boot...

Oozing atmosphere from its every pore (the entire film was shot on a sound-stage which lends it a queasy, claustrophobic feel), Eaten Alive matches The Texas Chain Saw Massacre for sheer insanity helped in no small part by some marvellous histrionics from Chain Saw star Marilyn Burns and William Finley (Phantom of the Paradise).

Eaten Alive is released on dual-format DVD and Blu-ray by Arrow Films on 21st September 2015 in a brand new 2K restoration of the film from the original camera negative.