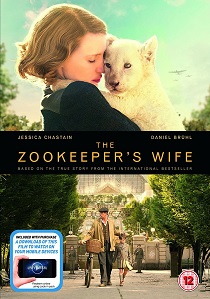 Based on the true story told in the best seller by Diane Ackerman, the critically acclaimed and heart-pounding WWII drama The Zookeeper's Wife debuts on Blu-ray and DVD 28th August 2017 from Universal Pictures (UK).

In 1939 Poland, working wife and mother Antonina Zabinska (portrayed by Ms. Chastain) became a hero to hundreds. Antonina and her husband Jan (Mr. Heldenbergh) care for animals at the Warsaw Zoo and have raised a family in an idyllic existence. Their world is overturned when the country is invaded by the Germans and they are forced to report to the Reich's newly appointed zoologist (Mr. Brühl). To fight back on their own terms, the Zabinskis risk everything by covertly working with the Resistance and using the Zoo's hidden passages to safeguard human life.

The Zookeeper's Wife comes packed with exclusive bonus content including deleted scenes as well as a special behind-the-scenes look at the making of the film and captivating interviews with the real-life Zabinski family.

HotDVDBDTV
DCI Tom Brannick returns, as the murder of a crooked accountant unravels a trail of greed that threatens to expose the true identity of the legendary assassin, codenamed, Goliath in Bloodlands: Series 2 released on DVD and Blu-ray 14th November 2022 from Dazzler Media. END_OF_DOCUMENT_TOKEN_TO_BE_REPLACED
Top PicksView