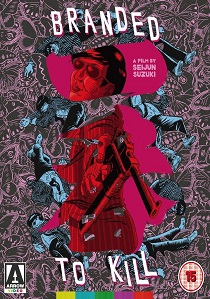 Arrow Video is delighted to announce a limited theatrical run of the upcoming Blu-ray and DVD release Branded to Kill, one of the undisputed classics of Japanese cinema. The film will open in select cinemas across the UK on 25th July 2014 before being released in a new digital transfer on Blu-ray and DVD from 28th July 2014.

Time and place are nonsense, Suzuki once famously said of his films, and some have gone as far to describe Branded to Kill as the cinematic equivalent of a 1960s Pop Art collage. The truth is that few outside of a select group of local cinéphiles and critics cared much for Branded to Kill upon its initial release in June 1967, least of all Kyûsaku Hori, the president of the Nikkatsu studio that produced it, who famously fired its director Seijun Suzuki claiming that his films didn't make sense and didn't make money.

Branded to Kill presents an extraordinary experience. Opening with the sharp crack of gunfire beneath the Nikkatsu logo before the lilting theme tune kicks in to accompany the credits, from the offset the viewer is immersed in a world that can only be described as pure cinema. Its tale of Jô Shishido's hitman, Gorô Hanada, and his attempts to rise to top-dog position in the underworld ranking of contract killers is pared down to mythic abstraction.

Branded to Kill is of a style all of its own. It operates simultaneously as a singularly nonconformist yet technically polished mood piece and as a sophisticated cinematic Rorschach that can be savoured again and again, with every further viewing revealing previously unnoticed aspects and individual meanings. Nonsense it may be, but it is intelligent, stylish and deliriously enjoyable nonsense, nonetheless.

Complementing this dual-format Blu-ray and DVD edition are a host of all-new extras, including a newly restored digital transfer and newly translated English subtitles. Alongside this, the disc will feature interviews with both director Seijun Suzuki and star Jo Shishido.

Seijun Suzuki's delirious 1967 hit-man film has drawn comparisons with contemporaries Le Samouraï and Point Blank and influenced directors such as John Woo, Jim Jarmusch and Quentin Tarantino among others.

The story of laconic yakuza Hanada, aka 'No. 3 Killer', the third rated hit-man in Japan who takes an impossible job from the mysterious, death obsessed Misako. Hanada bungles the hit and finds himself the target of his employers and a bullet ridden journey leads him to face the No. 1 Killer.

Shot in cool monochrome with beguiling visuals, Branded to Kill is an effortlessly cool crime film with a jazzy score that caused Suzuki to be fired by the studio's executives but is now rightly recognised as his masterpiece.

DVD
For the first time in the cinematic history of Spider-Man, our friendly neighborhood hero's identity is revealed in Spider-Man: No Way Home, released on DVD, Blu-ray and 4K UHD 4th April 2022 from Sony Pictures Home ... END_OF_DOCUMENT_TOKEN_TO_BE_REPLACED
Top PicksView