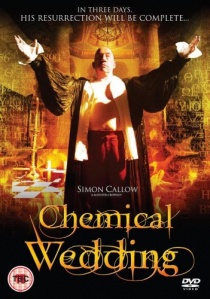 This darkly comic occult thriller comes to DVD in September riding a wave of reviews that have seen it hailed as a "tip-top laugh riot" (The Independent), "wickedly good fun" (The People), and a "future cult favourite" (Metro). Written by Julian Doyle and Bruce Dickinson, the film is inspired by the life and works of Edwardian mystic and occult scholar Aleister Crowley who shocked the establishment with his exploration of sexual magic, hallucinogenic drugs and bizarre occult ceremonies gaining him a reputation as 'the wickedest man in the world' while preferring to refer to himself simply as 'The Beast'.

Starring Simon Callow, the film sees veteran Monty Python associate Julian Doyle (whose credits include stints as second unit director on Brazil, Time Bandits, Erik The Viking and as editor of Time Bandits, Brazil, Monty Python's The Life of Brian and The Meaning Of Life) mining his previous film experience to bring to the screen a salacious and sexy supernatural thriller bolstered by Callow's standout performance as Crowley with all the gravitas, arrogance and humour of the original.

In a laboratory at Cambridge University, a state-of-the-art virtual reality suit is being linked to the world's biggest super computer. Unknown to his colleagues, programmer and occult obsessive Victor Neumann has been secretly uploading all of the late Aleister Crowley's black magic ceremonies into the computer in binary form, intending to fuse science and magic with the help of his accomplice, the stuttering Classics lecturer Dr. Haddo.

When Haddo enters the suit, the addition of a random chaos equation to the mix results in his apparent transformation into Crowley himself. Wreaking havoc with the students and faculty, the professor's new found arrogance and depraved appetites mirror the nature of his dead leader to the point where he believes himself to be the reincarnation of Crowley. Realising Haddo has knowledge that only the real Crowley could possibly possess, his colleagues finally accept that the incredible may be true and they are forced to focus their attentions on finding a way to send "The Beast" back to the hell from which he came.

"One of the most entertaining British genre movies of the past 20 years or so" (Sexgoremutants.co.uk) and "a pacily plotted thriller strewn with occult and scientific references that don't obscure the uproarious fun to be had within" (Metal Hammer), Chemical Wedding also stars John Shrapnel, Lucy Cudden, Kal Weber, Richard Franklin and, in an amusing cameo, Bruce Dickinson himself.

UHD
An expert cutter must outwit a dangerous group of mobsters in order to survive a fateful night in The Outfit, released 1st August 2022 on DVD, Blu-ray and 4K UHD from Dazzler Media. END_OF_DOCUMENT_TOKEN_TO_BE_REPLACED
Top PicksView