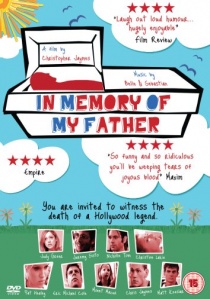 Having garnered four star reviews in Empire, Maxim, Film Review and Eye For Film during its UK theatrical release in June, Christopher Jaymes' black comedy In Memory Of My Father comes to DVD on 1st September 2008 courtesy of Scanbox Entertainment.

Written by, directed by and starring Christopher Jaymes (It's Alright Ma, I'm Only Trying), the film is a deliciously twisted examination of a narcissistic Hollywood family struggling to deal with the fallout caused by the death of its patriarch.

In a mansion in modern day Los Angeles, Chris (Jaymes), the youngest son of a self-proclaimed legendary Hollywood producer has been bribed by his dying father into documenting his death and its aftermath on video. Dad's passing brings to the house a gathering of close friends and relatives, including Chris' two older brothers - middle son, Jeremy (Sisto), and eldest, Matt (Keeslar). Also among those present are Meadow (played by Meadow Sisto), the brothers' cousin (who, due to the marriage between their divorced mother and their father's brother, is also their stepsister), and their father's eccentric, shopaholic lover, Judy (Greer).

As the mournful occasion progresses, unchecked emotions come to the fore. Jeremy finds himself forming a narcotically induced, homoerotic bond with Meadow's boyfriend, Eric (Eric Michael Cole), while Judy chooses to deal with her grief first by talking to the corpse of her lover and then having sex with Matt on the bedroom floor. And that's just the start of a long day that's destined to become as "legendary" as the man it's intended to honour.

DVD
A teenage murder witness finds himself pursued by twin assassins in the Montana wilderness with a survival expert tasked with protecting him as Those Who Wish Me Dead arrives on DVD and Blu-ray 30th ... END_OF_DOCUMENT_TOKEN_TO_BE_REPLACED
Top PicksView