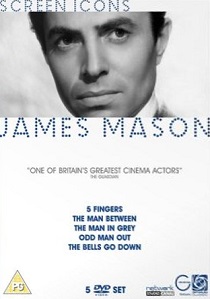 James Mason still managed to have a hugely successful acting career in both the UK and Hollywood despite being fired from his first film by director Alexander Korda after only a few days, having being scheduled to play James Bond in a TV version of From Russia With Love that never happened; he also later turned down the part of a Bond villain.

To celebrate his career, and released as part of the Screen Icons range, the 23rd of July 2007 sees Optimum Classic release the James Mason Boxset, featuring The Man in Grey, Odd Man Out, 5 Fingers, The Man Between and The Bells Go Down.

Mason was born in Yorkshire in 1909. Unlike Dirk Bogarde, another of our Screen Icons, Mason did not fight in WW2, his pacifist stance as a conscientious objecter alienating him from his family for some time. With many years of stage experience behind him, Mason's movie career really took off towards the end of the war with the first title in this box-set, melodrama The Man In Grey (1943), which proved to the legendary Gainsborough Studio's biggest success.

Odd Man Out (1947) - switches the action to Northern Ireland in a tense crime thriller directed by Carol Reed, whilst 5 Fingers (1952) is based on a true story set in Turkey, starring Mason as a valet with ambitions of becoming a rich gentleman of leisure. Another Reed - Mason collaboration: The Man Between (1953) emulates the themes of the all-time classic The Third Man as it looks at the seedy underbelly of post-war Berlin. Rounding out the box-set is The Bells Go Down, the story of how an East End auxiliary Fire Service unit came good.

The Man In Grey (1943) - James Mason plays the man in grey of the title - the cold-hearted aristocrat Lord Rohan, married by arrangement to the sweet, beautiful Clarissa (Phyllis Calvert). One day Clarissa meets by chance an old friend, impoverished actress Hester (Margaret Lockwood), whom she invites to become part of her household. Trapped in a loveless marriage, Clarissa is naively unaware of Hester's scheming nature. After the Hester engineers an encounter between Clarissa and the dashing Rokeby (Stewart Granger), forbidden love, drama and intrigue abound in this sweeping melodrama from the Gainsborough Studios - perhaps the finest, and certainly the most successful example of their world-renowned drama output.

Odd Man Out (1947) - In this first collaboration between James Mason and director Carol Reed, Mason plays Johnny McQueen, the leader of an underground Irish organisation who is wounded in a botched robbery that was carried out in order to obtain money to continue funding their illegal activities. The film then becomes a tense manhunt as Johnny goes on the run with the police one step behind him at every turn and safety seemingly always one step ahead. Rather than commenting on the political situation in Ireland at the time, Odd Man Out instead looks at the effect of such a climate on the people of the city - the fear, the paranoia and the divided loyalties - resulting in a superbly crafted thriller that won the BAFTA for Best British Film that year.

5 Fingers (1952) - A suspenseful, true-life spy thriller based on the memoirs of L.C. Moyzisch, 5 Fingers features an enigmatic performance from James Mason as a charming, amoral spy posing as a valet to a British ambassador during WWII. Working for the highest bidder with no personal political bent, Mason's character popularized the anti-hero protagonist. Written by the soon-to-be blacklisted Michael Wilson and directed by Joseph L. Mankiewicz (both were Oscar-nominated), the film also features a score by Bernard Herrman (Taxi Driver, Psycho).

The Man Between (1953) - A later collaboration between Mason and Carol Reed, The Man Between is oft considered a companion piece to the The Third Man thanks to it's atmospheric portrayal of a city struggling to survive in a grim post-war reality of poverty and mistrust. The action is here transposed to a divided Berlin, and to the beginning of the Cold War. Unlike the devilish Harry Lime, Mason's world-weary dealer Ivo Kerr is ultimately still a decent man, compelled by his love for a naïve schoolteacher to make one last misguided trip through the Brandenberg Gate, with potentially tragic consequences.

The Bells Go Down (1943) - This is the story of how an East End auxiliary Fire Service unit made good. It starts just before the war when a young couple, Bob and Nan, want to get married. The war destroys these hopes, and Bob signs on with the A.F.S., who are in the midst of a recruitment drive. The regular firemen, under MacFarlane (Finlay Currie), the Station Officer, and Ted Robbins (James Mason), a leading fireman, despise the A.F.S., looking upon them as amateurs. MacFarlane and Ted set out to give the A.F.S. some discipline, but the boys are determined to fight back.

BD
Arriving on DVD and Blu-ray 31st May 2021 from Acorn Media (UK), the hit police corruption drama from the makers of Bodyguard returns as Series Six of Line of Duty sees AC-12 facing their most ... END_OF_DOCUMENT_TOKEN_TO_BE_REPLACED
Top PicksView