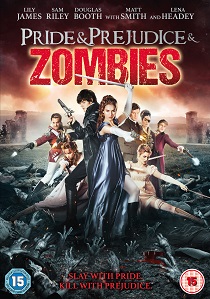 It's Pride and Prejudice like you've never seen it before, as Jane Austen's 19th Century classic is invaded by hordes of flesh-eating zombies! With its killer premise, an incredible cast of established stars and Hollywood's hottest rising talent, and big, blood-splattered action, Pride & Prejudice & Zombies is the literary-monster mash-up you've been waiting to feast on!

A mysterious plague has fallen upon 19th century England, the land is overrun with the undead and feisty heroine Elizabeth Bennet (Lily James; Cinderella, Wrath of the Titans) is a master of martial arts and weaponry.

Casting aside personal and social prejudices, Elizabeth and Mr. Darcy (Sam Riley; Control, On The Road, Maleficent) must unite on the blood-soaked battlefield to rid the country of the zombie menace and discover their true love for one another.