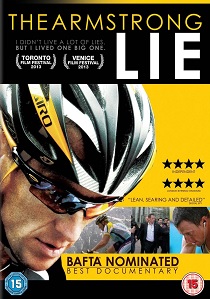 In 2009, Gibney was given unprecedented access to both the Tour de France and Armstrong, one of the most prominent figures in sports, to document the athlete's return to cycling following his 2005 retirement. However, after years of denying allegations of doping and condemning ex-cyclists who were guilty of using performance-enhancing drugs, Armstrong became the centre of a federal criminal investigation and an investigation by the US Anti-Doping Agency. As a result, the "ultimate comeback story" came to a halt.

In October 2012, Armstrong admitted to doping to the inner circle of filmmakers he had come to know over the years. Given this new information, the filmmakers decided that instead of chronicling the athlete's comeback, The Armstrong Lie would be filled with new interviews from Armstrong himself, his former teammates, as well as cycling experts, emerging as an insider's view and chronicle of Armstrong's collapse. Shortly thereafter, as part of the new film, Armstrong confessed to doping before the world in a January 2013 interview with Oprah Winfrey. The Armstrong Lie received a BAFTA® nomination for Best Documentary in 2014.

The Blu-ray and DVD include exclusive commentary from the Director, as well as a Q&A with Gibney, Frank Marshall, Bill Strickland, Jonathan Vaughters and Betsy Andreu. Both releases also come with more than 40 minutes of deleted scenes.

In 2009, Academy Award® winning director Alex Gibney was hired to make a film about Lance Armstrong's comeback to cycling. The project was shelved when the doping scandal erupted and re-opened after Armstrong's confession. The Armstrong Lie picks up in 2013 after Armstrong was stripped of his 7 Tour de France titles and presents a riveting, insider's view of the unraveling of the greatest deception in sports history.

UHD
Disney and Pixar's original feature film Luca, released on DVD, Blu-ray and 4K UHD on 23rd August 2021, is a fun and heartwarming story about friendship, stepping out of your comfort zone and two ... END_OF_DOCUMENT_TOKEN_TO_BE_REPLACED
Top PicksView