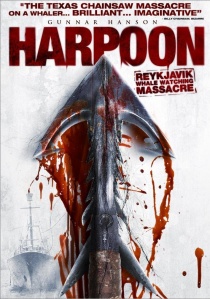 The Icelandic film industry's first ever bona fide foray into in-your-face exploitation horror movie territory, Harpoon: The Reykjavik Whale Watching Massacre, released on DVD by E1 Entertainment on 10th May 2010, a blackly comic and supremely gory affair that has led David Hayles of The Times to claim, 'it's tourists versus deranged whalers in this fright flick that'll make you scream and blubber.'

Having recently been given a rapturously reception by a rabid audience of appreciative horror fans attending a sold out screening at the Glasgow Film Festival's Annual Frightfest, Harpoon: The Reykjavik Whale Watching Massacre comes to DVD in May 2010 courtesy of E1 Entertainment and promises to be one of the most talked about horror releases of the year.

When a freak accident leaves the captain of their boat mortally wounded and the first mate jumps ship following his attempted rape of a passenger, a small group of tourists are forced to seek refuge on a passing former whaling vessel manned by a family of 'Fishbillies' with a psychotic score to settle. With whaling no longer on the agenda, the tourists become the helpless prey aboard a ship that is soon to be sailing on a sea of blood.

An unapologetic homage to the Tobe Hooper classic from which it has pilfered its title, Harpoon: The Reykjavik Whale Watching Massacre is a gutsy and graphic slasher that adds a dark vein of humour to its increasingly inventive methods of dispatching the unfortunate victims for whom a day trip at sea turns into the worst possible nightmare.