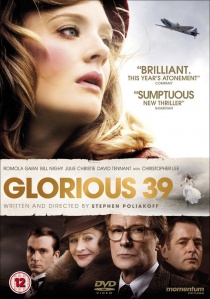 The halcyon days before the advent of the Second World War are beautifully recounted in the renowned Stephen Poliakoff's (Gideon's Daughter, Friends & Crocodiles, Close My Eyes) tour de force, Glorious 39, released on DVD from 29th March 2010, courtesy of Momentum Pictures.

With a beautifully woven central mystery focused around the conspiracies that were building ahead of the declaration of a war against Germany in 1939, Glorious 39 is much more than either a period drama or a murder mystery. It is infused with Poliakoff's incredible screenwriting skills, attention to detail and ability to glean arresting performances from some of Britain's best-known and best-loved acting talent. Coupled with sumptuous 30s costumes that offer a visual feast of vivid colour, luxe fabrics and exquisite detailing, Glorious 39 captures the very traditional, English way of life in the midst of political uncertainty.

A tense psychological thriller set both in present day London and the idyllic British countryside at the start of the Second World War, Glorious 39 follows Anne, a budding young actress who stumbles across secret recordings of a sinister Nazi appeasement plot. With war with Germany seemingly inevitable, forces within and without the government are determined to avoid another debilitating battle, leading to divided loyalties, questionable morals and even brutal acts of violence, all of which reverberate throughout society's upper echelons right to Downing Street itself. As Anne's friends and loved ones start to die in mysterious circumstances she discovers just how close to home the conspiracy really is and just how terribly she has been betrayed.

Related Articles
Horns, Unsane, Horns, Maleficent, Lovelace, Small Apartments, Killer Jo, St Trinian's 2: The Legend of Fritton's Gold, Cracks, Wonder Wheel, Maleficent: Mistress of Evil, Little Birds
Early Man, Early Man, The Danish Girl, Jupiter Ascending, The Theory Of Everything, Birdsong, My Week with Marilyn, The Pillars of The Earth, Black Death, Fantastic Beasts: Crimes of Grindelwald, Fantastic Beasts: Secrets of Dumbledore
The Miniaturist, Born To Kill, The Hour: Series 2, The Hour, The Windermere Children
Scars Of Dracula, The City Of The Dead, Howling II: Your Sister is a Werewolf, The Man Who Could Cheat Death, The Hound of the Baskervilles, The Wicker Man: The Final Cut, Dracula , The Curse Of Frankenstein, The Resident, Gremlins 2: The New Batch, The Lord of the Rings: The Fellowship of the Ring (Special Extended Edition), The Lord of the Rings: The Fellowship of the Ring, The Man with the Golden Gun, Sleepy Hollow, Star Wars : Episode II - Attack of the Clones, Star Wars : The Clone Wars, The Lord of the Rings Trilogy, The Hobbit Trilogy, Innocents In Paris: Vintage Classics, The Mummy, Dr. Terror's House Of Horrors
Close to the Enemy, Dancing On The Edge, Summer of Rockets
uwantme2killhim?, Treasure Island, The Last Kingdom: Season 4
Comments
BD Releases News Pick