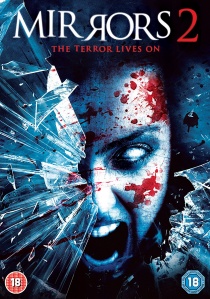 Starring Emmanuelle Vaughier (CSI NY, Saw II) and Nick Stahl (Terminator 3), Mirrors 2, released by Twentieth Century Fox Home Entertainment on 24th January 2011, follows the story of Max, a recovering addict struggling to come to terms with the car crash which killed his fiancé and left him tortured with the memory of her death.

Riddled with guilt and determined to try and make a new life for himself Max takes a job as nighttime security guard in the Mayflower department store, but as his nightshifts begin he sees visions of a young, mysterious woman in the store's mirrors. Unsure as to whether he is hallucinating or these visions are real Max checks the stores security camera archives with terrifying results.

Determined to find out more about the girl in the mirror Max visits the home of his predecessor only to be faced by a man ravaged by a horrific attack which forced him to give up his job. Unable to speak and mentally scarred by his time at the Mayflower, Max knows that if he is to find out who the girl in the mirror is he must look further into the mystery surrounding this seemingly normal department store.

As the truth reveals itself staff members begin to suddenly disappear and Max is faced with a series of horrifying and brutal murders interlaced with the malicious cover up of an innocent store worker's rape and murder. Running out of time as more members of staff continue to disappear Max is forced to delve deeper into the dark history of the cursed Mayflower department store, discovering that there may be more than first meets the eye.

After finding local woman Elizabeth Reign's (Emmanuelle Vaughier) missing sister used to work at the store, Max makes it his personal mission to uncover the truth of the Mayflower murders. Will Max find out who the woman in the mirror is and get out of the store alive or will the curse of the Mayflower consume every unsuspecting victim that comes through its doors...?

Taken from the original film Mirrors and based on the hair raising Korean film Into The Mirrors, this spine chilling supernatural horror will have you on the edge of your seat from start to finish.