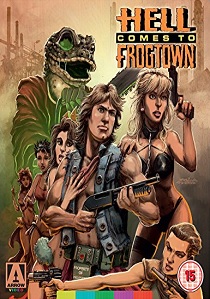 With the 20th Century drawing to a close, nuclear war has wiped out civilisation as we know it. The embattled human race's last remaining hope lies with one man and his loaded weapon.

Sam Hell may be an ex-con, but he also happens to be one of the last surviving fertile men on the planet. Now, under the custody of a group of feisty female fighters, Sam finds himself enlisted on a mission to impregnate a harem of beauties. Sounds cushy enough, but the ladies in question are prisoners of Frogtown home to a gang of mutant (and ill-mannered) amphibians!

Starring wrestler-turned-actor Rowdy Roddy Piper, known to John Carpenter enthusiasts for his body-slamming and bubblegum-chewing antics in They Live, Hell Comes to Frogtown is unashamedly a B-movie through and through with more guns and girls than you can shake a frog's leg at.

HotDVDBDUHD
Released on DVD, Blu-ray and 4K UHD 16th September 2019 from Lionsgate Home Entertainment, super-assassin John Wick is back and on the run after killing a member of the international assassin's guild, and with a $14 million price tag on his head - he is the target of hit men and women everywhere. END_OF_DOCUMENT_TOKEN_TO_BE_REPLACED
Hot PicksView