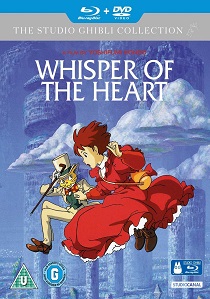 News
News Article Go back to homepage
Directed by Yoshifumi Kondo and from the creators of the Academy Award-winning Spirited Away, for the first time on Blu-ray, Studio Ghibli's Whisper of the Heart is out to own on Double Play DVD and Blu-Ray on 9th January 2012 from Optimum Home Entertainment
Keiju Kobayashi, Shigeru Tsuyuguchi, Shigeru Muroi, Takashi Tachibana, Issey Takahashi, Yoko Honna
Yoshifumi Kondô
Takashi Shoji, Hayao Miyazaki, Ned Lott, Rick Dempsey
Optimum Home Entertainment
1 hour 51 minutes
09/01/2012
Thank you for supporting DVD365.net when you order using the link(s) below. As an Amazon Associate we earn from qualifying purchases
Buy DVD
Buy BD
Information

From the creators of the Academy Award-winning Spirited Away comes a tale scripted by the legendary animator Hayao Miyazaki. Directed by his protégé Yoshifumi Kondo, Whisper of the Heart, out to own on Double Play DVD and Blu-Ray on 9th January 2012 from Optimum Home Entertainment, is a simple tale about a young girl who falls in love and learns to believe in herself.

Her name is Suzuku Tsukishima and she is nearing the end of her final year of junior high. An avid bookworm, she devours books while quietly dreaming about becoming a writer. One day, she meets Seiji, a lad who has the ability to both irritate and charm her, often at the same time. He also harbors an unusual ambition: to build violins in Cremona, Italy. Around the same time, she meets a kindly old man who owns an antique shop, who she later learns is Seiji's grandfather. One item in the store particularly catches her eye - a strange statue of a cat with glittering eyes. Inspired by Seiji's utter determination to realize his own dream, she writes a story about the feline-shaped sculpture coming to life.

HotDVDBD3D-BDUHD
The producers of Godzilla reimagine the origins of one the most powerful monster myths of all in Kong: Skull Island, released on DVD, Blu-ray, 3D Blu-ray and UHD on 24th July 2017 from Warner Home Video. END_OF_DOCUMENT_TOKEN_TO_BE_REPLACED
Top PicksView