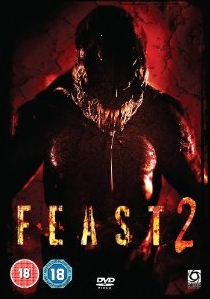 It's time to baton down the hatches as Feast II: Sloppy Seconds arrives on DVD and Blu-Ray from 11th January 2010 courtesy of Optimum Home Entertainment.

Borne out of Matt Damon and Ben Affleck's hugely successful Project Greenlight series, Feast was one of the more inventive and original horror debuts of recent years, featuring a host of out-there characters holed up in a dingy bar and fending off a family of flesh- and sex-hungry monsters. Now the ravenous, rapacious creatures are back, and this time they're taking on an entire town as original director John Gulager continues the story and ups the ante - and the gore - in every imaginable way.

In the aftermath of the slaughter that saw a family of grotesque monsters attacking a bar in a middle-American backwater, four survivors made it out alive, including original heroine Honey Pie (Jenny Wade, TV's Reaper). Fleeing the blood-soaked bar, they make it to a small neighbouring town where a new batch of monster-bait is dealing with their own problems. But when the disgusting creatures follow the trail into the town all bets are off as the locals are forced to band together with the new arrivals to try and figure out how to survive a fresh onslaught.

UHD
Sam Mendes, the Oscar®-winning director of Skyfall, Spectre and American Beauty, brings his singular vision to his World War I epic, 1917 to DVD, Blu-ray and 4K Blu-ray 18th May 2020 from ... END_OF_DOCUMENT_TOKEN_TO_BE_REPLACED
Top PicksView