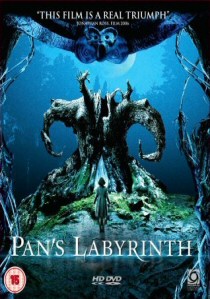 News Article Go back to homepage
From 12th November 2007, Optimum are going to be stepping up their involvement in the expansion of the new high def formats, with the release of three key titles on both Blu Ray and HD DVD. The titles in question are the gritty, nerve-shredding Wolf Creek, comic-horror epic The Host, and the enchanting, Oscar-winning Pan's Labyrinth.
Optimum Home Entertainment
Unknown
12/11/2007
Buy BD
Information

From 12th November 2007, Optimum are going to be stepping up their involvement in the expansion of the new high def formats, with the release of three key titles on both Blu Ray and HD DVD. The titles in question are the gritty, nerve-shredding Wolf Creek, comic-horror epic The Host, and the enchanting, Oscar-winning Pan's Labyrinth. Each will combine the crispest picture and sound, alongside a host of extras on each disc. To date we have published four key catalogue titles on HD-DVD - The Pianist, Mulholland Drive, La Haine and The Deer Hunter courtesy of Studio Canal's collaboration with Toshiba.

Optimum are taking an agnostic stance in terms of the relative values of each format, so we are now in a position to extend the line-up to include the afore-mentioned key titles on both formats for the Christmas period. Although we're remaining non-partisan about the result of the format war, we do recognize the need to support the evolution of DVD in the hope of restoring value to the market. Our release of these three titles is our response to the demand for a greater variety of product, which we are sure will increase considerably as the new wave of cheaper hardware appears this autumn.

Visionary director Guillermo del Toro brings his compelling and beautiful vision to the screen in Pan's Labyrinth. Fresh from its massive UK box office and DVD sales success, this enchanting yet dark fairytale can be seen as a companion piece to the haunting The Devil's Backbone and is del Toro's most personal film yet.

From the director of Memories of Murder comes Bong Joon-Ho's The Host, a fantasy monster movie, which expertly mixes humour and horror. On its release in its native Korea it broke box office records, taking the opening weekend record and the highest single-day admissions ever. Combining state of the art visual effects from the team behind Superman Returns, Harry Potter and the Goblet of Fire and Sin City with the dark and offbeat humour synonymous with Korean cinema, The Host is one of the most original monster movies to emerge for decades.

Based on terrifying true events, Wolf Creek is unforgettable, shocking and genuinely scary. A cinematic hand grenade, Wolf Creek unites all the elements of classic horror movies to create a uniquely Australian "Boogieman" in Mick Taylor. Written and directed by Greg McLean, Wolf Creek is not based on any one story but echoes some of the elements of recent crimes of hideous unparalleled violence and brutality.

BD
Get lit in the stylish ensemble caper, The Gentlemen, a star-studded, sophisticated action-comedy written and directed by Guy Ritchie, released on DVD, Blu-ray and 4K UHD 27th April 2020 from ... END_OF_DOCUMENT_TOKEN_TO_BE_REPLACED
Hot PicksView

A first-time adaptation of the recent global bestseller, a new Dragon Tattoo story comes to the screen starring Claire Foy as Lisbeth Salander, the fierce, outcast vigilante defender from the acclaimed Millennium book series created by Stieg Larsson, in The Girl in the Spider's Web.
Movie quote