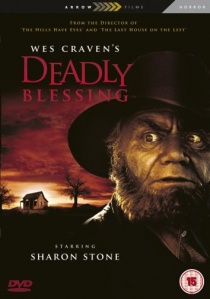 Unavailable in any format for many years, Wes Craven's third feature following his notorious The Last House On The Left and The Hills Have Eyes, Deadly Blessing, finally comes to DVD for the first time ever on 29th October 2007 from Arrow Films, just in time for Halloween, and complete with the film's original and much talked about finale which was controversially cut from the version released in UK cinemas.

Starring a stunningly youthful and beautiful Sharon Stone (Casino; Basic Instinct; Total Recall) in her first ever speaking role, alongside Ernest Borgnine (Escape From New York; The Wild Bunch; Marty), Michael Berryman (The Devil's Rejects; The Hills Have Eyes) and Maren Jensen (Battlestar Galactica), Deadly Blessing sees director Craven moving away from the uncompromising ferocity of his first two features and instead focusing on a far more brooding and atmospheric kind of terror.

In an attempt to distance himself from the strict religious Hittite community in which he was raised - one that rejects all the trappings of modern life - Jim Schmidt (Douglas Barr) has married a headstrong city girl, Martha (Maren Jensen), and left the sect. When Jim is involved in a tragic and highly mysterious accident, the close-knit community shuns Martha leaving her to seek the comfort of two old college friends, Lana (Sharon Stone) and Vicky (Susan Buckner), who come to stay with her during her time of mourning. As the three friends begin to unlock the mystery surrounding Jim's death, it becomes apparent there is a diabolical killer in their midst who may be hiding deep within the local God-fearing community.

Fondly remembered by horror fans for its many key set-pieces (particularly one featuring a snake in a bathtub and a terrifying waking-dream sequence involving a very large spider and a wide-open mouth that serves as a notable precursor to Craven's masterful A Nightmare On Elm Street), Deadly Blessing is a tense and thrilling old-school horror film that is ripe for reassessment in an age when horror fans are more-often-than-not simply being bludgeoned into submission by barrages of grisly images served up as entertainment.

BD
An intimate and moving story of childhood memories, Belfast is available to own on Blu-ray and DVD 25th April 2022 from Universal Pictures (UK). END_OF_DOCUMENT_TOKEN_TO_BE_REPLACED
Top PicksView