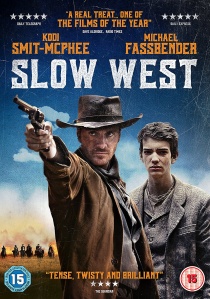 Michael Fassbender (Shame, 12 Years a Slave, Prometheus) is a powerhouse in, Slow West,a journey across the American Frontier, released on DVD and Blu-ray on 2nd November 2015 courtesy of Lionsgate Home Entertainment.

When 16-year-old Jay Cavendish (Smit-McPhee; Dawn of the Planet of the Apes, The Road) comes to the American frontier to search for the woman he loves, he meets mysterious traveller Silas (Fassbender), who agrees to be Jay's guide - but for his own dishonourable ends.

As they embark of a journey of hardships and self-discovery, a ruthless outlaw named Payne (Mendelsohn; Animal Kingdom, The Dark Knight Rises, Starred Up) pursues them, hoping to reach Jay's love first and claim the bounty on her head.

A brilliant example of a postmodern western, Slow West breaks down the genre to be intelligent, funny, violent, and strangely touching all at once. As the directorial debut of musician and former Beta Band member John Maclean, it's little wonder that Slow West is so perfectly composed. He weaves together the Old West's stark landscapes, a pensive score, and poignant script to create something that's closer to a work of literature than an all-guns-blazing western.

The story's anchored by a powerhouse performance from Michael Fassbender, who once again proves why he's this generation's most infallible leading man. There are also career-making turns from Kodi Smit-McPhee and Caren Pistorious, while Ben Mendelsohn once again treads the line between humour and dark menace.

Slow West explores a wide range of themes on its journey through the American Frontier, including love, death, friendship and the nature of the civilised world.