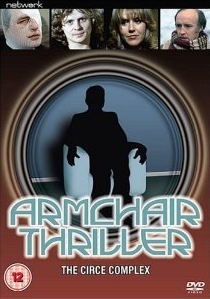 NewsTV Series
News Article Go back to homepage
Regularly attracting over 15 million viewers, Armchair Thriller mixed an uncanny sense of the familiar with the bizarre. Network continues the classic Armchair Thriller series with the release of The Circe Complex and The Chelsea Murders, both out on 6th October 2008.
Network
Unknown
06/10/2008
Thank you for supporting DVD365.net when you order using the link(s) below. As an Amazon Associate we earn from qualifying purchases
Buy DVD
Information

Network continues the classic Armchair Thriller series with the release of The Circe Complex and The Chelsea Murders, both out on 6th October 2008. Regularly attracting over 15 million viewers, Armchair Thriller mixed an uncanny sense of the familiar with the bizarre: ordinary people unexpectedly plunged into extraordinary situations.

Each story was told in four to six half hour episodes with nail-biting scenarios and cliff-hanging endings. The only programme where the Thames Television landscape ident was set at night time, the show was famous for its unsettling intro (featuring an eerie score by Roxy Music's Andy Mackay) setting the scene for this late-night thriller.

When a barmaid and part-time model becomes a murderer's third victim in Chelsea, the only apparent links are to a local reporter, Mary, and three art graduates financing a film with local part-time jobs. As further terrifying and seemingly random attacks take place, a bizarre common factor emerges: the victims' initials all match those found on plaques commemorating Chelsea's former literary residents...

Originally made as a six-parter for Series Two, this story remained unfinished and was finally transmitted as a movie-length version in 1981. Included on this two-disc set are both the as-transmitted movie version and the original six-parter, which is mostly without incidental music and episode recaps.

While Tom Foreman serves life for murder, a cache of jewellery he seemingly hid before his arrest makes his attractive wife, Val, a yet-more tantalising prospect. A string of men become her lovers, including her psychiatrist, Ollie. When Ollie finally recognises a mysterious cycle being enacted, he finds a name for his discovery: the Circe Complex.

An intriguing and multi-layered plot revolving around the twin seductions of wealth and lust distinguishes this thrilling tale by celebrated writer Desmond Cory.