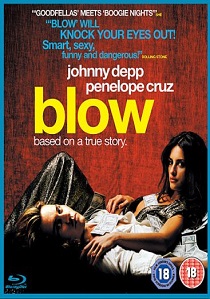 A potent expose of the power of powder, Blow follows cocaine's rise and excesses and the lives that rose and fell in it's wake. Blow's all consuming world is given a full visual hit courtesy of Entertainment in Video's Blu-Ray release and is available to buy on 29th September 2008. Directed by Ted Demme (Snitch, Life, A Decade Under The Influence) from a screenplay by David McKenna and Nick Cassavetes, Blow also boasts an impressive cast headed by Penelope Cruz (Captain Corelli's Mandolin, Vanilla Sky, Waking Up in Reno) and Ray Liotta (Goodfellas, The Rat Pack, Hannibal).

In just a few short years during the 1970s, powder cocaine turned from a relatively obscure illegal drug to a multi-billion dollar international business. While most people know that powerful Colombian drug cartels were behind the surge in cocaine's popularity, what most people don't realise is that the connection that made it all possible was an average small-town American boy called George Jung (Johnny Depp), who decided to pursue the American Dream his way. Blow charts George's life from his humble working class beginnings when, determined not to struggle in the way his parents Fred (Ray Liotta) and Ermine (Rachel Griffiths) did, he starts to sell pot in 1960's California.

Successful and buoyed by the deals he was doing, George is caught importing 660 pounds of marijuana and lands a two year prison sentence but when he skips bail to be with his dying girlfriend Barbara Buckley (Franka Potente), George finds himself arrested once again. With a new three year prison sentence and Colombian cocaine trader Diego Delgardo (Jordi Molla) as his cell mate, George faces choices that change his life forever. Convinced by Diego that the future lies in cocaine, George agrees to head to Columbia to meet Diego when he's released from prison. True to his word George does exactly that, beginning a journey that eventually makes him Pablo Escobar's (Cliff Curtis) number one importer, bringing in a staggering 85 percent of cocaine sold in the US.

With a huge cocaine empire and a serious coke habit, George is forced to tackle the power of powder head on as double-crossing drug buddies crawl out of the woodwork and the FBI start investigating the luxurious lifestyle George has built for himself, his beautiful wife Mirtha (Penelope Cruz) and their daughter. Still estranged from his parents and fast losing a grip on his world, George's fortunes veer out of control and by the 1980's he faces the prospect of losing everything - wealth, love, respect and his freedom. Is there time for one last deal?

UHD
Based on the global blockbuster videogame franchise from Sega, Sonic The Hedgehog, released on DVD, Blu-ray and 4K UHD from 8th June 2020 from Paramount Home Entertainment, tells the story of the ... END_OF_DOCUMENT_TOKEN_TO_BE_REPLACED
Top PicksView