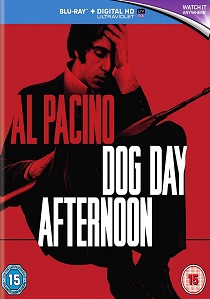 This unique thriller, filled with sardonic comedy and based on a real-life incident, earned six Academy Award® nominations (including Best Picture) and won an Oscar® for Frank Pierson's streetwise screenplay. John Cazale, Charles Durning (Golden Globe®-nominated for their roles) and James Broderick co-star.

Pacino and Lumet (collaborators on Serpico) reteam for the drama which currently has a 97% Fresh Rotten Tomatoes® Score. Pacino plays mastermind Sonny and John Cazale is his partner Sal - two optimistic nobodies who set out to rob a bank, and unexpectedly create a media circus and a complete disaster.

Cazale's short six-year acting career included only four other films besides Dog Day Afternoon - The Godfather, The Godfather: Part II, The Conversation and The Deer Hunter. In 1978, just after wrapping the latter, Cazale died tragically at age 42 and cinema was robbed of one of its brightest talents.

Related Articles
Manglehorn, Danny Collins, The Last Act, Stand Up Guys, Glengarry Glen Ross, Jack & Jill, The Son Of No One, Cruising, The Devils Advocate, The Insider, Cruising, Once Upon a Time... in Hollywood, Scarface: 35th Anniversary, Once Upon A Time In Hollywood, The Irishman, The Godfather Coda: The Death of Michael Corleone, American Traitor, House Of Gucci, The Godfather Trilogy, Heat
The Conversation, The Deer Hunter: 40th Anniversary, The Godfather Trilogy
Sisters, O'Brother Where Art Though?
Network, Find Me Guilty, Before the Devil Knows You're Dead, The Verdict
Comments
Hot Pick

HotDVDBDDIGITAL
With stunning revelations, glamorous journeys, and the arrival of the Jazz Age, Downton Abbey: A New Era, released on DVD and Blu-ray 15th August 2022 from Warner Home Video, will be the Crawleys' biggest adventure yet as they grapple with their future and new intrigue about ... END_OF_DOCUMENT_TOKEN_TO_BE_REPLACED
Top PicksView