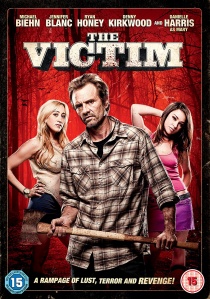 Having emerged from the most pivotal Sci-Fi films ever to grace our screen, Michael Biehn takes to the Director's chair to gain ownership of the grindhouse genre having already channelled his onscreen vivacity in Robert Rodriguez's "Planet Terror" and having learnt the modus operandi from a directing mastermind in James Cameron.

During a social outing deep in the quiet woodland with close friend Mary, Annie's life is put in jeopardy when she is witness to a violent act at the hands of two Sheriff's Deputies. Fleeing from the attackers she stumbles across Kyle, a shady recluse living in a cabin the middle of the woods.

The rugged loner stays far from civilisation, which is until a knock on the door throws his solitary life into chaos. Having been affected by Mary's desperate bid for her life, Kyle bravely decides to take Sheriff's law into his own hands. Two worlds collide in this psychological thriller that will make you question your trust in mankind. Who is The Victim?

DVD
A 13-year-old girl named Meilin turns into a giant red panda whenever she gets too excited in Disney and Pixar's 25th feature film Turning Red, released on DVD, Blu-ray and 4K UHD 2nd May 2022 from Walt Disney Home ... END_OF_DOCUMENT_TOKEN_TO_BE_REPLACED
Top PicksView