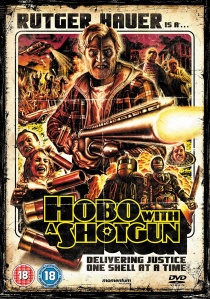 It began as an award winning "fake" Grindhouse trailer that embodied the genre far more successfully than anything produced by Quentin Tarantino (Death Proof) and Robert Rodriguez (Planet Terror) and became an internet sensation via YouTube. Now, Hobo With A Shotgun, director Jason Eisener's affectionate and remarkably authentic tribute to the exploitation movies of the 1970s and 80s, is a full-on, no-holds-barred, kick-ass movie that Leon Poultney of Zoo magazine has called "the most brilliantly disturbing film I've seen in years". Now Momentum Pictures is releasing Hobo With A Shotgun on DVD and Blu-Ray from 1st August 2011.

Starring Rutger Hauer (Blade Runner; Sin City; The Hitcher) in the title role and inspired by exploitation classics such as Street Trash and The Exterminator amongst others, Hobo With A Shotgun goes one better than recent homages to the genre such as Machete and Drive Angry by being "the only recent example of cinematic retro-sleaze that could plausibly be mistaken for a piece of straight-to-video nastiness that has been collecting dust on a shelf since 1983" (Eye Weekly).

When an ageing Hobo (Hauer) jumps from a freight car in a new city hoping for a fresh start in life, he soon realizes he has well and truly reached the end of the line. He finds himself trapped in an urban hell, an anarchic world overrun by murderers, rapists, paedophiles, petty crooks, prostitutes and corrupt cops. Reigning supreme over them all is the city's crime boss, Drake (Brian Downey) and his two insanely sadistic sons, Slick (Gregory Smith) and Ivan (Nick Bateman). All the Hobo wants is to be able to afford to buy a second-hand lawn mower from the local pawnshop, start his own small business and make the city a more beautiful place. But a run-in with Slick and Ivan while trying to rescue pretty hooker-in-distress Abby (Molly Dunsworth) changes all that. Pushed beyond his limits, he decides to arm himself and go about changing things in an entirely different way to mowing lawns.

An unmissable tour-de-force of gratuitous violence, gore and bloody mayhem, Hobo With A Shotgun is "a brilliantly crafted cacophony of sex and violence" (Four Stars - Chris Tilly, IGN) and "is so incredibly over the top with its excess, fans of the genre are going to be bowing to it" (Slashfilm).

DVD
Released on DVD 4th April 2022 from BBC Worldwide, Golden Globe, Emmy and BAFTA winner Ben Whishaw stars in This Is Going To Hurt, Adam Kay's adaptation of his best-selling memoir about life as a junior doctor. END_OF_DOCUMENT_TOKEN_TO_BE_REPLACED
Top PicksView