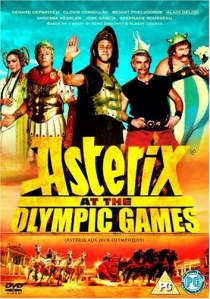 NewsComedyAdventure
News Article Go back to homepage
Dynamic duo; Asterix and his big friend Obelix are back on another one of their action-packed adventures...but this time they are going to take on the Olympic Games! Starring Gerard Depardieu and Clovis Cornillac, the hilarious family comedy Asterix At The Olympic Games comes to DVD on 18th August 2008 from Pathe Distribution Limited.
Franck Dubosc, Vanessa Hessler, Alain Delon, Benoît Poelvoorde, Clovis Cornillac, Gérard Depardieu
Thomas Langmann, Frédéric Forestier
Krishnan Jay, Maya Carillon, Jeremy Burdek, Manon Baudoin
Pathe Distribution Limited
1 hour 56 minutes
18/08/2008
Thank you for supporting DVD365.net when you order using the link(s) below. As an Amazon Associate we earn from qualifying purchases
Buy DVD
Information

Dynamic duo; Asterix and his big friend Obelix are back on another one of their action-packed adventures...but this time they are going to take on the Olympic Games! Starring Gerard Depardieu (Green Card, Vivaldi) and Clovis Cornillac (Bellamy, Cash), the hilarious family comedy Asterix At The Olympic Gamesc omes to DVD on 18th August 2008 from Pathe Distribution Limited.

Audacious young Gaul Alafolix (Stephane Rousseau) falls head over heels in love with Greek Princess Irina. With the help of Asterix (Cornallic), Obelix (Depardieu) and the druid Panoramix (Jean-Pierre Cassel), he travels to Greece to win the Olympic Games and the Princess' heart. There he finds himself in competition with Cesar's treacherous son Brutas, who is feverishly plotting his father's downfall. Asterix and Obelix end up competing in the Olympics...against some very big, very strong and very competitive Romans. Luckily Asterix has a plan...

Brighten up your summer with this perfect complement to this year's Beijing Olympics, by watching Asterix At The Olympic Games. This fun-filled comedy DVD is perfect for all the family, Asterix fans and all those who fancy a laugh-a-minute movie.

HotDVDBDUHD
From the acclaimed director of fan-favourites such as Baby Driver, Shaun of the Dead and The World's End comes the tribute to 1960s London in Last Night In Soho, available to own on DVD, Blu-ray and 4K UHD 31st January 2022 from Universal Pictures (UK). END_OF_DOCUMENT_TOKEN_TO_BE_REPLACED
Top PicksView