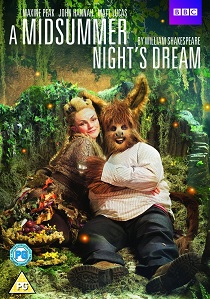 Adapted by award-winning writer Russell T Davies (Doctor Who, Queer as Folk), a bold new interpretation of the classic Shakespearean comedy A Midsummer Night's Dream is released on DVD and Blu-ray by BBC Worldwide on 6th June 2016.

This 90-minute adaptation of the much-loved play set in the tyrannical court of Athens and the magical forest around the city stars Maxine Peake (Silk, The Village) as Titania, Matt Lucas (Little Britain) as Bottom, John Hannah (The Mummy, Damages) as Theseus, Eleanor Matsuura (Spooks, Cuffs) as Hippolyta and Hiran Abeysekera (Lion In The Tent) plays Puck.

A psychological thriller set in the world of New York City ballet, Black Swan stars Natalie Portman as Nina, a featured dancer who finds herself locked in a web of competitive intrigue with a new rival at the company (Mila Kunis). A Fox Searchlight Pictures release by visionary director Darren Aronofsky, Black Swan takes a thrilling and ...