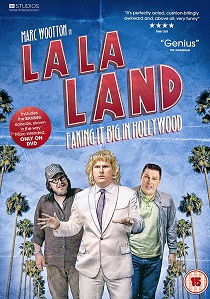 La La Land collides character comedy and documentary to unique and hilarious effect. Marc's characters are fictitious, but everybody else - including his accomplices Kiki (Brendan's camerawoman), Chico (Shirley's driver) and Ruta (Gary's mentor) - is real and utterly unaware they are talking to an actor. The show is a satirical exposé of the worst the entertainment industry has to offer: Brendan exemplifies the most horrible traits of the glory-hunting documentary director, Shirley is the ultimate celebrity obsessed charlatan psychic and Gary is every cocksure but clueless wannabe actor who thinks he's God's gift.

Directed and Executive Produced by three-time BAFTA nominee Misha Manson-Smith, La La Land is a hugely ambitious and complex stunt that was years in the devising, months in the making and remarkable as a feat of sheer daring and bank-heist planning, with some of the many run-ins with the LAPD finding their way into the final show. Unsurprisingly, the show has become the talk of Hollywood and counts comedy tastemakers from Larry David to Ben Stiller among its many fans. La La Land is narrated by Julian Barrat of The Mighty Boosh and has an original score by Steve Mason, founder of The Beta Band. The show is written by Marc Wootton, comedian and writer Liam Woodman and Misha Manson Smith.

BD
Experience the thriller influenced by the astounding real-life story of the Gucci family and their unexpected legacy in House Of Gucci, available on Blu-ray and DVD 21st February 2022 from Universal Pictures (UK). END_OF_DOCUMENT_TOKEN_TO_BE_REPLACED
Top PicksView