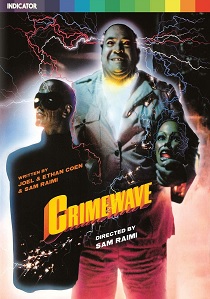 After the colossal success of The Evil Dead, director Sam Raimi teamed up with the Coen brothers (fresh from Blood Simple) to make his next film, Crimewave, an unusual mixture of screwball comedy, film noir and B-movie homage.

Raimi's film tells the bizarre story of a security-system installer, Vic (Reed Birney), who finds himself in the electric chair when he falls in love with Nancy (Sheree J Wilson), a femme fatale on the run from two bumbling exterminators 'of all sizes' (Paul L Smith, Popeye, and Brion James, Blade Runner).

A notoriously troubled production which flopped upon its original release, Crimewave can now be enjoyed as a riotously entertaining showcase for Raimi and the Coens, which also benefits from a highly amusing performance from cult-horror star Bruce Campbell.

UHD
Doctor Strange teams up with a mysterious teenage girl from his dreams who can travel across multiverses in Doctor Strange in the Multiverse of Madness, released on DVD, Blu-ray and 4K UHD 18th July 2022 from ... END_OF_DOCUMENT_TOKEN_TO_BE_REPLACED
Top PicksView