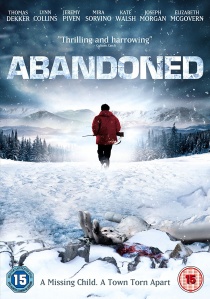 The small working-class town of Angels Crest is a tight-knit community resting quietly in the stunningly beautiful Rocky Mountains. Ethan (Thomas Dekker), one of the town's residents, is a young father but not much more than a kid himself. He has no choice but to look after his three-year-old son Nate, since mom Cindy is an alcoholic.

But one snowy day, Ethan's good intentions are thwarted by a moment of thoughtlessness, resulting in tragedy. A local prosecutor (Jeremy Piven) haunted by his past goes after Ethan and the ensuing confusion and casting of blame begins to tear the town apart.

HotUHD
After moving to a new town, two brothers discover that the area is a haven for vampires as the classic The Lost Boys is released on 4K UHD 20th September 2022 from Warner Home Video. END_OF_DOCUMENT_TOKEN_TO_BE_REPLACED
Top PicksView