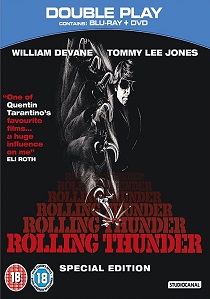 The ultimate revenge film, Rolling Thunder, receiving its Blu-ray pemiere on 30th January 2012 from StudioCanal, is one of the quintessential examples of action cinema from the glorious 1970s. This little-seen gem was directed by John Flynn (Lock Up) and co-written by two top screenwriters, Heywood Gould and Paul Schrader. This was Schrader's first produced screenplay after Taxi Driver. The film's title also was the inspiration for Quentin Tarantino's short lived video/DVD label, Rolling Thunder Pictures.

When Major Charles Rane (William Devane) returns home to San Antonio, Texas, he is given a true hero's welcome. He and his friend, John Vohden (Tommy Lee Jones) have endured 8 years of physical and mental torture in a POW camp.

However, the adjustment isn't going to be easy. His wife has fallen in love with another man, and his son, whom he adores, no longer remembers him. In Rane's own mind, he is a walking dead man - he died the day he was taken prisoner.

However, what Rane doesn't know is that his experiences as a POW are nothing compared to the ordeal he is about to face.

The unthinkable happens and Rane, subdued and more distant than when he returned, is forced to plan out his own justice, with the help of his friend Vohden. But there is no sense of pleasure in his task; only the ice cold determination of a man who has suffered too much and refuses to be stopped.

BD
Arriving on DVD and Blu-ray 31st May 2021 from Acorn Media (UK), the hit police corruption drama from the makers of Bodyguard returns as Series Six of Line of Duty sees AC-12 facing their most ... END_OF_DOCUMENT_TOKEN_TO_BE_REPLACED
Top PicksView