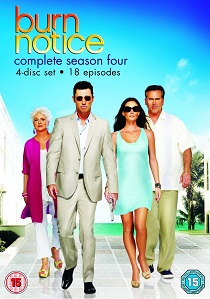 Don't miss the next instalment of the thrilling and high octane Burn Notice Season 4 on DVD from 26th December 2011 from Twentieth Century Fox Home Entertainment. Burn Notice stars Jeffrey Donovan as Michael Weston, a blacklisted spy who finds himself stranded in sun-soaked Miami. The action-packed Season 4 commences with a new counterintelligence expert, Jesse Porter, played by Coby Bell, who loves to fight bad guys just as much as Michael does.

Heating up the night with our hot undercover agent are Fiona (Gabrielle Anwar), the beautiful ex-IRA operative and ex-girlfriend of Michael; Sam (Bruce Campbell), our favourite washed-up military intelligence muscle; and Michael's mother Madeline (Emmy Award® winner Sharon Gless), who is one tough cookie herself.

This season maintains the critically acclaimed formula, yet spices it up further by introducing new cast additions and featuring high-profile guest stars such as Robert Wisdom (The Wire, Prison Break) and Robert Patrick (Terminator 2, The Sopranos).

HotDVDBDUHD
In celebration of its 25th anniversary, one of Luc Besson's most incredible movies, Leon, has been restored to stunning 4K and is being released on 4K UHD, Blu-ray and DVD 11th November 2019 from StudioCanal. END_OF_DOCUMENT_TOKEN_TO_BE_REPLACED
Top PicksView