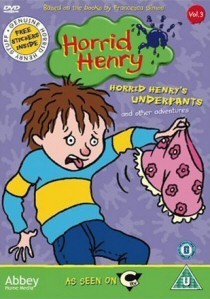 Released on 19th November 2007 and packed with fabulously funny episodes, exclusive, fun-filled extras and some Horrid Henry stickers complete with images and catchphrases, this unmissable new DVD is sure to be at the top of many a Christmas gift list!

The popularity of CITV's animated series mirrors the phenomenal success of the Horrid Henry books which have sold nine million copies and been translated into 23 different languages. In the UK, the equivalent of two out of every three children aged five to eight own a Horrid Henry book or audio CD.

Horrid Henry fever looks set to go into overdrive this autumn. CITV's two interactive Horrid Henry games have already attracted half a million plays so far and continue to grow! Aside from this exciting new DVD release, 13 brand new TV episodes will air as from September. Meanwhile the all-new Horrid Henry: The Abominable Snowman makes its debut in October following Horrid Henry's first ever Annual which was published in August.

Henry is horrid. His parents, younger brother, teachers, neighbours and relatives all say so. If someone's put itching powder in someone's swimming trunks, sold their brother as a slave, or flattened all the tents on the family camping holiday, you can bet it's him. From where Henry's standing, life is just not fair - the rest of the world is against him. After all, Henry isn't trying to be truly horrid - it's just something that comes naturally to him. One thing's for sure, his laugh-out-loud exploits will delight little rebels - and little angels - everywhere. So make sure that you get your hands on Horrid Henry's Underpants while you can!