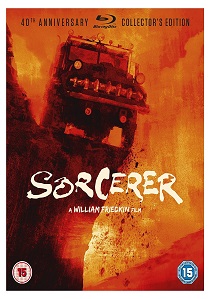 NewsDramaThrillerAdventure
News Article Go back to homepage
In a brutal exploration of fate and destiny, rediscover Sorcerer ... as William Friedkin's hidden gem from 1977 is released to Blu-ray for the first time 6th November 2017 from Entertainment One.
Roy Scheider, Bruno Cremer, Francisco Rabal, Amidou, Amidou, Peter Capell
William Friedkin
William Friedkin
Entertainment One
2 hours 1 minutes
06/11/2017
#Sorcerer40thAnniversary
Thank you for supporting DVD365.net when you order using the link(s) below. As an Amazon Associate we earn from qualifying purchases
Buy BD
Information

Rediscover Sorcerer ... as William Friedkin's hidden gem from 1977 is released to Blu-ray for the first time 6th November 2017 from Entertainment One. This tense thriller starring Roy Scheider (Jaws, The French Connection) is a brutal exploration of fate and destiny.

Exiled from their home nations, four strangers from separate corners of the earth agree to undertake a dangerous mission to transport unstable dynamite through the hot, dense jungle of South America in order to earn their passage home.

When the slightest bump in the road could equal instant death, the real question is not whether these men will survive this nerve-shredding ordeal but who will they have become if they return at all?

Now, 40 years since its release, Sorcerer is regarded by critics and filmmakers alike as a true lost cinematic masterpiece - a triumphant feat of filmmaking that encapsulates the revolutionary artistry of 1970s American cinema and not to be missed.