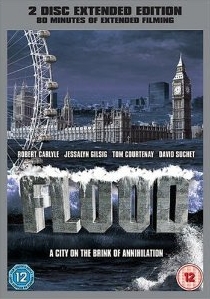 Throughout history there are regular reports of the Thames flooding, the first occurrence on record being in 1236. These events have been getting progressively more destructive. The worst incident in recent memory was the flood of 1953. It devastated the East Coast and the Thames Estuary, taking a toll of over 300 lives. However fortunately, on this occasion, the flood did not reach the city centre. In 2007, rapidly increasing global warming, rising sea levels and growing tides have made a major flood, a shocking probability.

In recent years there has been massive increases in central urbanization and geologists have discovered that London lies on a bed of clay. This has caused many inhabitants to fear that a disaster of significant magnitude could mean that one of the greatest capital cities in the world, a city that has endured for more than 2000 years, could simply cease to exist. This time London would find itself in a watery grave...

An exhilarating new motion picture, Flood takes you there - to the staggering, catastrophe on the day that nature's ultimate force tests every resource - human and technological - of a great metropolis.

Flood - 2 Disc Extended Edition, released by Lionsgate Home Entertainment on 20th October 2008, contains a mind-blowing 80 minutes of extra footage and 40 minutes of interviews -- This is Flood as it is meant to be seen! Over 7 million viewers were gripped by the extended edition of Flood on TV and now here's your chance to own it!

Related Articles
Marcella: Series 2, The Comic Strip Presents: The Best Of, The Young Ones: The Complete Collection
Born Equal, Go Now, Once Upon A Time: Season 3, Stargate Universe: Season 2, 28 Weeks Later, Eragon, The Beach, Once Upon a Time in The Midlands, The World is not Enough, Once Upon A Time: Season 7, The War of the Worlds, COBRA, Carla's Song: Limited Edition
Decline and Fall, A Perfect Murder, Peter Pan Goes Wrong
45 Years, Quartet, Billy Liar: 50th Anniversary, Gambit, King of Thieves, The Queen's Corgi, Summerland, The Railway Children Return
The Bible: TV Miniseries
Willow: 25th Anniversary Edition, The Borgias: Season 2, 44 Inch Chest, Scandal: 30th Anniversary Edition
For your consideration

HotDVDBD
King Of Thieves, released 21st January 2019 on DVD and Blu-ray from StudioCanal, is the incredible true story of the spectacular Hatton Garden diamond heist, the biggest and most daring in British history. END_OF_DOCUMENT_TOKEN_TO_BE_REPLACED
Comments
UHD Releases News Pick