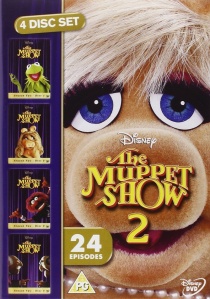 It's time to play the music, light the lights and meet The Muppets again as The Muppet Show: Series Two, released by Walt Disney Studios Home Entertainment on 5th November 2007, returns centre stage - remastered and restored for all to enjoy. Rediscover the chaos, quick wit and zany, much loved characters of Kermit, Fozzie, Miss Piggy and Rolfe alongside some very famous star guests.

Bursting with hilarious comic sketches, jokes and songs, Jim Henson's award-winning, world famous characters bring their enduring magic to this highly original series that is so popular across the generations. The star of the show in 24 chaotic episodes is MC Kermit the frog. He is joined by the rest of the gang, including the unpredictable and formidable Miss Piggy, amateur comedian Fozzie Bear and the brilliantly unkempt piano player Rolfe.

This spectacular four-disc set is packed with exclusive bonus materials that will delight dedicated fans and captivate a whole new audience. DVD extras include The Original Muppet Valentine Special; personal and revealing interviews with Kermit, Rizzo and Animal; a music video of Weezer and The Muppets and the bits that you were never supposed to see!

Each collectable episode introduces a special guest star who joins in the crazy goings on. World famous guests include Steve Martin, Sir Elton John, Julie Andrews, Peter Sellers and John Cleese. All of whom show their own warm sense of humour when they take part in typically madcap Muppet situations when the jokes are often at their expense.

The DVD boxset is also a perfect gift as a nostalgic treat or watch the delight on a loved one's face as you introduce them to the inspirational, celebrational world of The Muppets for the first time. Join Kermit and friends for a unique, upbeat and unforgettable Muppetfest at home with The Muppet Show: Series Two on DVD from 5th November 2007.

DVD
In The Black Phone, released on DVD and Blu-ray 3rd October 2022 from Warner Home Video, a teenage boy is abducted by a sadistic killer and discovers a phone in his basement cell that allows him to communicate with the killer ... END_OF_DOCUMENT_TOKEN_TO_BE_REPLACED
Top PicksView