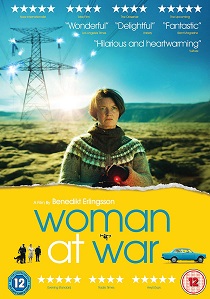 Picturehouse Entertainment are delighted to announce the Home Entertainment release of Woman At War available on DVD and Blu-ray on 16th September 2019.

This funny, smart and engaging film from acclaimed director Benedikt Erlingsson (Of Horses and Men) is by turns heartwarming and hilarious featuring a stand-out performance by Halldóra Geirharðsdóttir in the role of feisty female protagonist Halla.

To her friends, Halla leads a quiet and routine existence. But her happy and upbeat exterior hides a secret double life as a committed environmental activist. Known to others only by her alias 'The Woman of the Mountain', she secretly wages a one-woman-war on the local aluminium industry to protect the stunning highland landscape that is under threat.

Just as she begins planning her biggest and boldest operation yet, she receives an unexpected letter that will change everything. She will be forced to choose between her environmental crusade and the chance of fulfilling her dream of becoming a mother.

Funny, moving and utterly unique, Woman At War follows Halla as she juggles the adoption of a beautiful little girl whilst planning her final act of industrial sabotage.

Celebrated by audiences and critics globally, Woman At War is an unmissable comedy drama which captures the zeitgeist of today's environmental issues and modern motherhood.