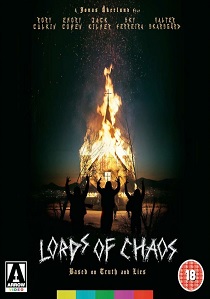 Oslo. Norway. The early 1990s. A new, uncompromising style of heavy metal explodes onto the underground - True Norwegian Black Metal! Blasting and brutal yet also majestic, this subgenre achieves worldwide infamy through the extraordinary achievements of its musicians and the suicides, murders and church burnings that come to define the scene...

17-year-old Euronymous (Rory Culkin) longs to escape his idyllic middle-class life. Enlisting a clique of fanatical youths - Necrobutcher, Hellhammer and Dead (Jack Kilmer) - he forms the most evil band in the world... Mayhem. The band soon achieve notoriety for the extremity of their shows and the morbid cult that surround them, but the dark world Euronymous has created soon degenerates into a mire of murder and arson when an arch-rivalry with Varg (Emory Cohen), of the band Burzum, spirals out of control...

Lords of Chaos is released on Blu-ray 22nd July 2019 from Arrow Video.