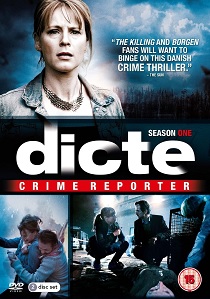 This fresh gripping Nordic Noir series aired to huge acclaim in Denmark and comes to DVD in its original 10-episode Danish format. Dicte - Season One is currently airing on More4 and will be available on DVD from 11th July 2016. A second season will follow later this year and a third series has been commissioned.

Newly divorced journalist Dicte Svendsen (Iben Hjejle - High Fidelity) has returned with daughter Rose to her hometown of Aarhus where she is trying to escape the past and build a new future. But working as a crime reporter, she soon finds herself caught up in a case that is destined to open old wounds when she discovers the body of a murdered young woman.

From organ trafficking and diamond smuggling, to political assassinations and football hooliganism, Dicte is a brash, quick-witted reporter, who is not afraid to put herself in danger and will stop at nothing to uncover the truth, throwing herself into each investigation, jeopardising not only her life, but sometimes the lives of those around her.

DVD
Inspired by real-events, The Serpent, released on DVD 22nd February 2021 from ITV Studios Home Entertainment, tells true story of how Charles Sobrajh, one of the most elusive & wanted criminals was ... END_OF_DOCUMENT_TOKEN_TO_BE_REPLACED
Top PicksView