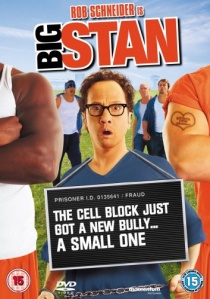 Set for a DVD release on 28th July 2008 courtesy of Momentum Pictures, Rob Schneider stars and directs in Big Stan, a whacky US comedy about a little man who makes it large.

Big Stan starts out as a little insecure man. He discovers the only way he can accommodate his overbearing arrogance in his teeny, tiny body is to humiliate and torture people - and turns into a two-bit conman in the process. However when he's sent to prison on a charge of fraud, his over-inflated confidence deserts him and the prospect terrifies him. He knows he's going to be breakfast for the bunch of strong-armed convicts he's about to face and has no hope of fending for himself.

Ahh...but there's salvation yet. Inside he seeks help from a mysterious martial arts expert, known only as The Master, who transforms Big Stan into a prize kung fu fighter. Sorted! This, of course, is the result: Big Stan is no longer jailbait - he kicks the jailbirds into place and even manages to bring warring prison factions together, establishing peace between the jail walls. Sceptical? You'd better believe - watch the man in action.

Big Stan stars Rob Schneider, who also makes his directorial debt with the film, following in the footsteps of comedians such as Ben Stiller (who starred in and directed the comedy, Zoolander). Also in the frame are: David Carridine (Kill Bill Volume 1 and 2) and M.Emmett Walsh (Raising Arizona, A Time to Kill). The movie was written by Josh Lieb of The Simpsons fame.