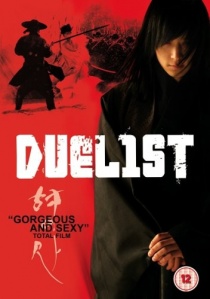 It is a time of social and political upheaval in Korea. Amidst the chaos, the Minister of Defence, Piljoon Song is plotting to eradicate all those who oppose him, thereby assuming complete control of the armed forces and, in effect, the country itself. Meanwhile, the economy has been thrown into disarray by the introduction of vast amounts of counterfeit money. Charged with investigating the source of the counterfeiting operation are Detective Namsoon, a young female officer, and her partner Detective Ahn.

In an attempt to solve the case, Namsoon goes undercover adopting a variety of guises in order to infiltrate the criminal underworld. The mystery deepens, however, when one by one the prime suspects in the investigation wind up dead. The key to solving the mystery appears to be an enigmatic, handsome swordsman known only as Sad Eyes, whom Namsoon repeatedly encounters during the course of her inquiries. Despite appearing to be on opposite sides of the law, they inexplicably find themselves romantically drawn to each other and proceed to engage in a game of cat-and-mouse resulting in a series of duels that merely serve to strengthen their mutual feelings of infatuation and professional respect. But as they each struggle to reconcile the conflict between love and duty, Namsoon discovers the truth behind Sad Eyes' identity and it becomes all too apparent that their fate can only be decided by one final duel.

Taking visual inspiration from the works of artists Matisse and Mondrian (specifically the pieces "Dance" and "Manhattan" respectively) and basing the fight choreography on rhythms and movements more associated with the tango and ballet than with kung fu and swordplay, in Duelist Lee Myung-Se has created a uniquely artistic and visionary martial arts film unlike anything seen before.

Over two hours of special features include: a making of documentary; an interview with director Lee Myung Sae; featurettes on the editing, music and visuals of the film; behind the scenes interviews and footage of the cast and a promotional gallery.