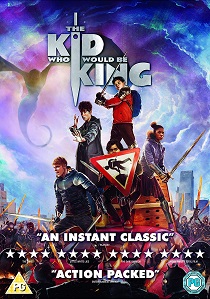 Old school magic meets the modern world in the epic family-friendly adventure, The Kid Who Would Be King. Alex thinks he's just another nobody, getting bullied at school and told what to do by his teachers, until he stumbles upon the mythical Sword in the Stone, Excalibur.

Now, with the help of the legendary wizard Merlin, he must unite his friends and school yard enemies into an allied band of knights to defeat the wicked enchantress Morgana. With the future at stake, Alex must become the great leader he never dreamed he could be and save the world.

Touted as, "One of the best kids' adventure movies in recent memory" (Matt Goldberg, Collider), and Certified FreshT on Rotten Tomatoes®, The Kid Who Would Be King arrives on Blu-ray and DVD 24th June 2019 from Twentieth Century Fox Home Entertainment.

UHD
Pixar Animation Studios presents Cars, the high-octane adventure comedy that shows life is about the journey, not the finish line, zooming in for the first time on 4K Ultra HD 19th July 2021, exclusive to Zavvi. END_OF_DOCUMENT_TOKEN_TO_BE_REPLACED
Top PicksView

As Carrie and Saul search for the truth behind the bombing of CIA headquarters, lines are blurred between friend and foe and no one can be trusted. While hiding a stunning secret of her own, Carrie helps recruit Brody for a dangerous mission which ...
Movie quote