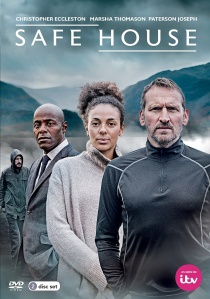 Written and created by Michael Crompton (Silent Witness, Code of a Killer) and directed by Marc Evans (Snow Cake, Hinterland), this grippingly dark, atmospheric four-part series, inspired by true events, is released as a two-disc set on 25th May 2015.

Robert (Eccleston - Doctor Who, Fortitude) a former police detective, shot in the line of duty and school teacher Katy (Marsha Thomason - White Collar, Lost), have embarked on an idyllic new life in the Lake District running a guest house. But when old friend and police detective, Mark (Paterson Joseph - Peep Show, Babylon), turns up with a surprising offer, their life is about to change dramatically.

Their house becomes a safe house for people whose lives are in danger and soon their first 'guests' arrive. David (Jason Merrells - Clocking Off, Cutting It) and Ali Blackwell (Nicola Stephenson - All at Sea, Holby City) are in hiding with their children after an attempted abduction of their young son and a serious assault on David. Their assailant is Michael (Peter Ferdinando - A Field in England, Starred Up), who will stop at nothing to find them.

For Robert, protecting this family resurrects the fears and anxieties bound up in the fateful night when he was ambushed, seriously injured and the star witness in his care assassinated. As a consequence of managing the safe house, Robert begins to question the events surrounding the shooting, uncovering a web of lies.

Nothing is what it seems and soon it becomes apparent that it's not only those staying in the Safe House who have something to hide...