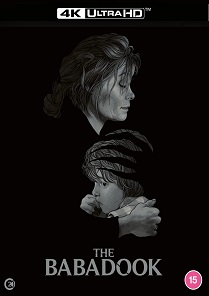 Jennifer Kent's acclaimed, unsettling chiller The Babadook stars Essie Davis (Miss Fisher's Murder Mysteries), as a grief-stricken mother who is desperately trying to bring up her troubled son the best she can, will a new book be the answer to his sleep woes, or is it the beginning of an unimaginable nightmare?

Following the violent death of her husband on the day their son Samuel (Noah Wiseman) was born, Amelia struggles with his erratic behaviour, and is still battling with the never-ending grief. Refusing to celebrate Samuel's birthday as it's inextricably linked to such a traumatic time, life is a struggle and the one person who's always been there for her, her sister's (Hayley McElhinney) patience is wearing thin.

As Samuel's seventh birthday approaches his fears get worse, he's convinced a monster is coming to get them, and he won't settle, no matter how many bedtime stories he's told. When an intriguing storybook appears on the bookshelf, Samuel becomes convinced that the Babadook is the monstrous creature he's always feared and as Amelia senses the ominous presence herself, she slowly begins to unravel.

Following on from the limited edition, The Babadook is released as a standard Blu-ray disc 28th March 2022 from Second Sight Films.

DVD
After more than thirty years of service as one of the Navy's top aviators, Pete 'Maverick' Mitchell is back where he belongs as Top Gun: Maverick flies onto DVD, Blu-ray and 4K UHD 31st October 2022 from Paramount Home ... END_OF_DOCUMENT_TOKEN_TO_BE_REPLACED
Top PicksView