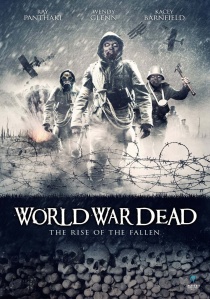 The Battle of The Somme marked one of the bloodiest battles in human history wounding and killing 1,000,000 German and Allied soldiers in its wake.

But...there was no winner. Now, 100 years later, a documentary team - led by filmmaker Marcus Singh (Ray Panthaki - 28 Days Later) and Emma Washington (Wendy Glenn - You're Next) - has travelled to the site to unveil the mysteries that led to that horrendous outcome. But what they unearth is something far worse than they could have imagined - the fallen armies, risen, with an agenda to settle the score.

Just when you thought Zombies couldn't get any more scary, Anchor Bay's entertaining World War Dead: Rise of the Fallen takes them to a new level of evil and gives the found footage genre a fresh lease of life in this exciting, fun and of course gory new horror starring You're Next's Wendy Glenn. Released on 4th May 2015 on DVD and Blu-ray, World War Dead: Rise of the Fallen is a must for horror fans.

BD
After more than thirty years of service as one of the Navy's top aviators, Pete 'Maverick' Mitchell is back where he belongs as Top Gun: Maverick flies onto DVD, Blu-ray and 4K UHD 31st October 2022 from Paramount Home ... END_OF_DOCUMENT_TOKEN_TO_BE_REPLACED
Top PicksView