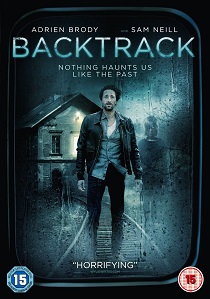 Adrien Brody and Sam Neill star in the spine-chilling mystery for the Insidious generation! Sustaining a nail-biting atmosphere throughout, Backtrack is the latest suspenseful Australian horror that will leave you guessing right until the shocking finale. The Babadook meets The Sixth Sense as this terrifying mystery unwinds and buried secrets are unveiled

Psychologist Peter Bower's life is thrown into turmoil when he discovers that the patients he has been seeing are ghosts. Risking his own sanity, Peter delves into his past to uncover a terrifying secret which only he can put right. Backtrack is a spine-chilling story from the acclaimed writer-director, Michael Petroni.

With an eerie sense of atmosphere that harkens back to The Sixth Sense and an accomplished scare factor reminiscent of Insidious, Backtrack, released on DVD by Arrow Films on 14th March 2016, is the perfect modern day ghost story.