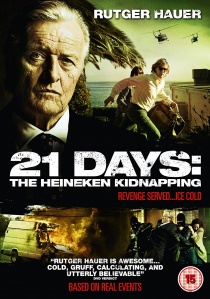 Revenge served... Ice cold. Starring Rutger Hauer, and based on real events, 21 Days: The Heineken Kidnapping is released on DVD and Blu-Ray by Arrow Films on 11th March 2013.

In 1983 Alfred Heineken was one of the world's most successful brewers and perhaps the most influential man in the Netherlands - and thus a prime target for kidnappers. Snatched by a team of inexperienced, hot headed young criminals, he is then held for 21 gruelling days in a cold, cramped cell.

Rendered powerless for the first time in his life, Heineken finds himself at the mercy of the gang's youngest member, who takes special pleasure in humiliating and frightening the business magnate. When the huge ransom is finally paid, Heineken is set free - and begins to plot his elaborate revenge.