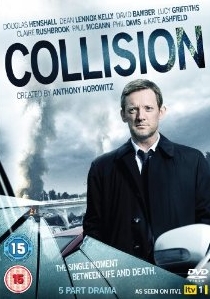 Douglas Henshall, Kate Ashfield, Paul McGann and Phil Davis lead a prestigious cast in Collision - a compelling new 5-part drama serial, created by Anthony Horowitz, for ITV1 and released on DVD on 16th November 2009 courtesy of 4DVD. This extraordinary drama story follows the lives of everyone affected by a road collision and a group of people who have never met, but who all share one single defining moment that will change everything.

This tense, thought provoking drama, tells the story of a major road accident and a group of people who have never met, but who all share one devastating moment that will change their lives. The five part serial is a modern epic tale which explores how fragile our lives are. It focuses on how fate and the feeling of immortality behind the wheel play a part in modern lives, where events are not always in our control and ordered.

Douglas Henshall (Primeval, Dorian Gray, French Film) and Kate Ashfield (Shaun of the Dead, The Children, The Diary of Anne Frank), play the senior police officers in charge of the investigations whose complicated personal lives threaten to collide with the grim job they face. Paul McGann (True Dare Kiss, Withnail and I) stars as millionaire property developer Richard Reeves who starts to fall for the service station waitress who comes to his aid after the crash, played by Lucy Griffiths (Marian in Robin Hood, Sugar Rush, Sea of Souls, U Be Dead). Dean Lennox Kelly (Married Single Other, Robin Hood, Shameless, The Invisibles, Being Human) and his real life brother Craig Kelly (Coronation Street, Strictly Come Dancing, Hotel Babylon, Queer as Folk) team up for the first time to play brothers Danny and Jeffrey Rampton, whose business dealings are about to be exposed as a result of the crash.

Claire Rushbrook (New Tricks, Mutual Friends, Whitechapel) plays Karen Donnelly who survives the crash, but has a secret which puts her life in jeopardy again. Phil Davis (The Fixer, Desperate Romantics, Whitechapel) plays Brian Edwards who escapes the carnage which kills his mother in law, Joyce, played by Sylvia Syms (The Queen, EastEnders, Above Suspicion; The Red Dahlia). His wife Christine, played by Jan Francis (U Be Dead, Mistresses, New Tricks) is devastated by the death of her mother, and confused by her husband’s reaction to the police questions.

Collision is created and written by acclaimed author and screen writer Anthony Horowitz (Foyle’s War) and co-written by Michael A Walker (Does God Play Football). The producers are Jill Green and Eve Gutierrez. It is directed by Marc Evans (My Little Eye, Snow Cake), marking his first return to TV direction in five years.

Amid the tangle of twisted metal and emotional turmoil wrought by the tragedy of a crash of this scale are the stories of the victims and the impact of the accident on their families, friends and colleagues. As the terrible task of investigating the cause of the carnage begins, a series of revelations emerge: from Government cover-ups and smuggling, to disturbing secrets and murder.