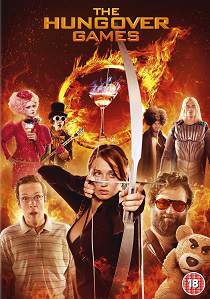 What's the best hangover cure? Catch the crew whose odds are so not in their favour. The Hungover Games, a parody of The Hangover and The Hunger Games series, will be released on Digital HD 27th October 2014 and DVD 10th November 2014 from Sony Pictures Home Entertainment.

The Hungover Games offers more than 20 minutes of bonus content including Go Deep Inside The Hungover Games, a behind-the-scenes look into the making of the film, plus exclusive interviews with the star-studded cast. The Gag Reel will keep you laughing out loud well after the credits roll.

After celebrating Doug's upcoming wedding in a cut rate hotel in Laughlin, Nevada, our hungover party-ers, Bradley, Ed and Zach, wake up in a strange room in an even stranger world... and without their pal, Doug. After meeting the haughty and flighty Effing and the gruff, alcoholic Justmitch, our trio puts the pieces together and realises that they are on a train car headed to The Hungover Games. But instead of the twelve districts of The Hunger Games, our guys have to go toe to toe against various Pop Culture Districts, including The Superhero District, The Middle Earth District, The Puppet District, and The Johnny Depp District.