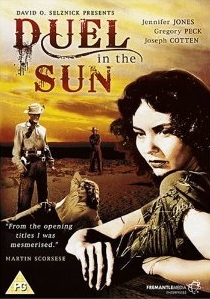 The first film director Martin Scorsese remembers seeing as a child, and still one of his favourite films of all time, David O. Selznick's epic Western romance Duel In The Sun blazes on to DVD from Fremantle Home Entertainment on 13th October 2008.

Selznick's artistic follow up to Gone With The Wind, and with which he had intended to out-do his earlier eight Oscar winning masterpiece, both critically and commercially, Duel In The Sun is every bit as grand, gloriously overblown and visually impressive as one would expect from one of Hollywood's most legendary producers at the height of his powers. The "Titanic" of its day, at the time of its release, it was also the most expensive movie ever produced.

Starring Oscar winning actors Jennifer Jones (The Song Of Bernadette), Gregory Peck (To Kill A Mockingbird), Lionel Barrymore (A Free Soul) and Walter Huston (The Treasure Of The Sierra Madre), alongside Joseph Cotton (Citizen Kane; The Third Man), Lillian Gish (The Night Of The Hunter) and a scene stealing Butterfly McQueen (Gone With The Wind), the film's directorial duties are credited to King Vidor (War And Peace), even though seven different directors (including Selznick himself) were actually hired and fired during the production.

Following the hanging of her father for the killing his adulterous wife and her lover, vivacious half-Native American girl Pearl Chavez (Jones) is sent to live with an elderly distant relative, Laura Belle (Gish), her racist, land-owning husband Senator McCanles (Barrymore) and their two sons: upstanding Jess (Cotton) and rebellious womaniser Lewt (Peck). Her arrival on their ranch naturally causes a major upheaval amongst the family, not least because both sons begin vying for the affections of this beautifully exotic young woman. But unbridled passions soon lead to betrayals, destructive love-hate affairs and even murder.

Dubbed "Lust In The Dust" at the time of its release and condemned by the Catholic Church for its amorality and overtly sexual content, Duel In The Sun is unquestionably one of the most visually stunning movies ever made, breathtaking in scope and beautifully shot. Part Western, part turbulent romance, part family saga, the film is also notable for a host of memorable performances, particularly those of Oscar nominated Jennifer Jones and Lillian Gish, and Hollywood heartthrob Gregory Peck revelling in a rare villainous role.

HotUHD
Now more stunning than ever before, return to the stunning locations and epic adventures in Peter Jackson's Middle-earth in The Lord of the Rings Trilogy, arriving on stunning 4K UHD 30th November 2020 from Warner Home Video. END_OF_DOCUMENT_TOKEN_TO_BE_REPLACED
Top PicksView